It is currently 1:11am and my mind is racing. I am in the middle of a hypomanic episode. My name is Chris Joy and I have Bipolar 2 Disorder. 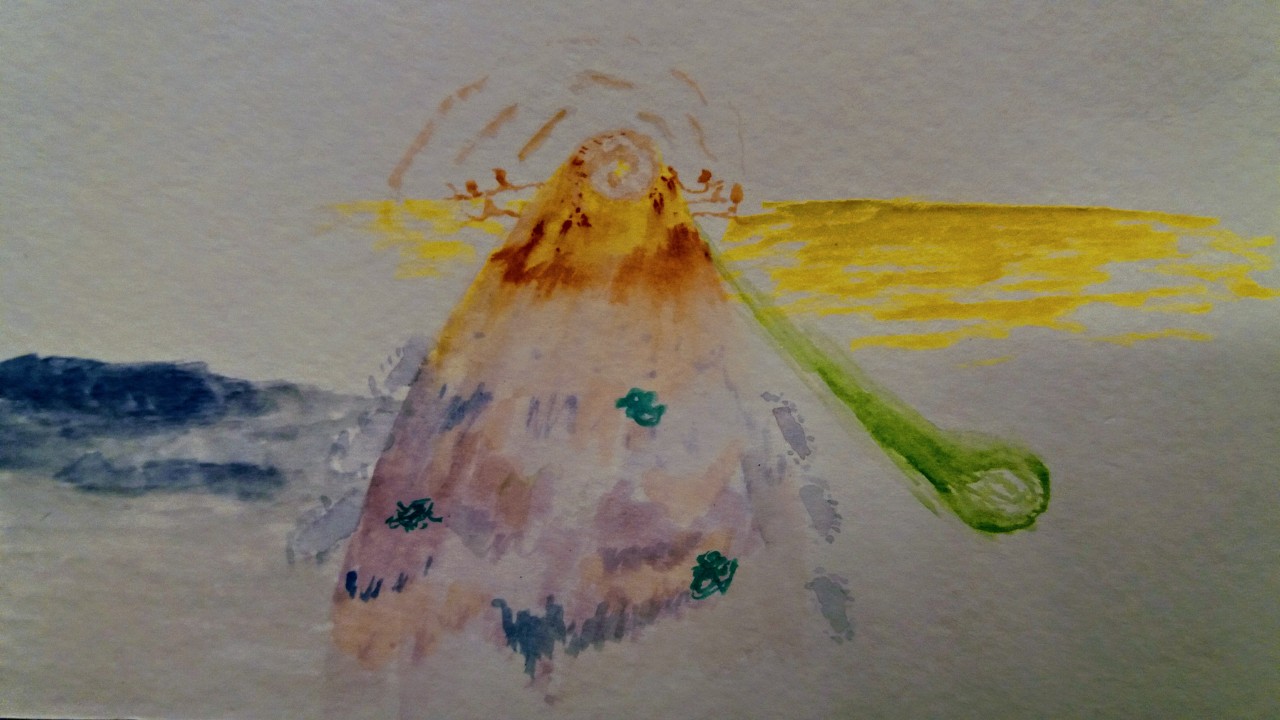 This is a watercolor painting I did during a bad episode of mood swings I was having earlier this year. It is a weird state of ever-changing complex emotions that are hard to get out, so I find that fucking around with watercolor really helps me express the inexpressible. It is not an easy disorder to describe, but screw it, let’s see if I can.

I feel that there are a lot of misunderstandings and misconceptions when it comes to mental disorders, in my case Bipolar 2 Disorder. I do not typically have multiple mood swings in a day. I can hold down a job and have a strong marriage with a loving wife. It is possible to lead a “normal” life and, for the most part, most people do not know I have a mental disorder.

But, I do have periods of time where it takes all of my energy to just get out of bed. Quite literally. It feels like I ran a marathon the day before and now there is someone sitting on my chest, mocking me, telling me “You ain’t doing shit today buddy. I don’t care what you had planned.” Sometimes it just feels like I am living someone else’s life. Like I don’t belong where I am. Like the world is staring at me and my brain tells me that the people I love don’t really like me. My brain will sometimes find a way to convince me that whatever you just said was meant to hurt me.

The depression comes and goes. It usually hits me for a few weeks to a couple months and then gradually goes away. Then I get to be me again. This happens about twice a year. Most of the time it does not get too bad, but sometimes it does. Only once have I come really close to ending it all.

With the depression though also comes the mania, or hypomania as it is called for Bipolar 2. I don’t have the typical Bipolar symptoms. Most people afflicted with Bipolar Disorder experience mood swings, but much more intense ones. People with traditional Bipolar Disorder will have intense mood swings for a week or so; where their brain is off to the races, taking charge, ready to kick some ass, money is no object because it is going to come in anyway, and what is money but a social construct? Who fucking needs it? I should go off the grid. I am going to buy a canoe … That is kind of what it is like to have a manic episode. Mind racing and so energetic that you feel like you can conquer the world. Bipolar Disorder 1 is like that. Some people afflicted with it do not even experience depression.

I experience a much milder version. I tend to go spend like $40 on headphones I don’t really need or stay up until 3am writing an article on my blog because my mind won’t get sleepy like it is supposed to.

I guess the point of this post is that for the longest time, I had no fucking clue that I had a disorder. I was always told that I was sensitive. I experienced emotions more intensely than other people I knew, but I thought that was just me. I was the emo kid, writing in his journal and trying to figure out why no one in school liked me (they actually did like me). My parents chalked it up to puberty, and I don’t blame them. That is a hectic time in everyone’s lives and feeling isolated and confused is pretty much par for the course.

But eventually I realized I had chronic depression. I had times where I could not function and it took everything I had to just go through the regular motions of life. I dropped out of college at least 5 or 6 times. In fact, I dropped out of college the first time because I had my first panic attack in my second semester, two weeks before finals. I had straight A’s. I drove to school and when I parked everything went white. I couldn’t get out of my car. I called my Mom crying because I did not know what was wrong with me and she told me to come home. That should have been my first clue.

I thought that that was it. I was just depressed and had to live with it and I did for the most part. My wife, who is incredible and the reason I am still here, understands what I go through and does everything she can to help me through it. We mostly just try to run out the clock and she picks up the slack left behind when I can’t be a person. But then something happened.

I was getting close to finishing college and while I was at work I started having panic attacks again. I was stressed and when I was at work I could hardly focus. The thought of having to go make lattes for the morning commuters was terrifying, for no reason. That is when it all clicked for me. Something was seriously wrong.

I set up an appointment with a psychiatrist and was shocked when he told me I was bipolar. I pretty much said “no, no, you mean depressed. I am not crazy. I just get down for stretches of time. But I get out of it eventually.”

“Do you have racing thoughts sometimes?”

“Do you spend money you don’t have?”

“… I just went to the casino yesterday. But I am a poker player.”

“Did you have the money to gamble with?”

I was shocked. But the more I thought about it, the more it made sense. The sensitivity, the extreme emotional reactions, the depression, the gambling, the grandiose thoughts of being able to change the world with my writing, the feelings of being the worst writer to ever put words together in a sentence. I was Bipolar, and that was okay. I was not crazy or dangerous. I was just Chris.

I am now on a mood stabilizer and it has changed my life. The extremes are gone. I actually cried the first week I took my medication because everything became so much easier. I let things roll off of my back. I was not sluggish when I woke up in the morning for the first time in over a decade. I could get through my day without feeling like I was going to collapse in on myself, or conversely, that I was wasting my life working for “The Man” and I should go hike across New Zealand. I could just function, effortlessly.

I don’t want to give off the impression that I am cured though. I mean obviously, I am writing this article in my underwear at 3 in the morning. This is something I will always live with. But it has gotten better, and with help it is getting even easier to live with. Now that I am more stable, I can start undoing the damage that my brain has caused me for over 15 years. I can learn to trust people, I can learn to recognize my symptoms and manage them when they occur, I can start building the life I have always wanted.

Finally, the point I guess I wanted to make is that if any of this sounds familiar, don’t wait. Seek help. It is out there and there are so many resources available you will be shocked if you do a simple google search. I typed in “free mental health + my city” into google for a friend and was shocked to find a free clinic within walking distance. You do not have to suffer or go through this alone. If you are struggling, reach out and talk to someone. I wish I would have done something a lot sooner, but it is never too late to make a difference in your own life. I think if we all make talking about mental health less of a taboo and talk about it openly and honestly, it will make it easier for people suffering to get the help that they deserve.