The Wonders of Wondercon 2017

I had been anticipating this one for a while. I had the opportunity to go to Comic Con in San Diego in 2015 and it was not what I was expecting. There was a sea of humanity the likes of which I had not even fathomed. According to Wikipedia, 167,000 people attended the convention and it felt like it. All of the nearby streets were filled with marvel and D.C. superheroes, anime characters, and mostly confused tourists wearing the nerdiest shirt in their closet.

I was not looking forward to that again but I was told this would be different. I heard from everyone that had attended Wondercon before that this was what ComicCon was supposed to be. How it was in the “good old days.” I was hesitant to believe them but they were right. It Was Amazing!

One of my favorite parts of the trip was the parking. Anaheim opened up the parking lot at Angel’s Stadium and provided a free shuttle to the convention center. It made the whole thing very painless.

Upon arrival, I was immediately hit with the smell of food. There was a line of gourmet food trucks lined up at the entrance to the convention hall. It was a smart move by Wondercon and provided a wide range of food that all looked and smelled wonderful. I ended up getting a hot dog. I am so obsessed with hot dogs, I wrote a post about it. It was very good and ranked up their with the best of them. I looked up the food truck and it is called Viking Sausage Food Truck. You can use their website to look up where the truck will be in Anaheim that day. If you are in the area, you should look them up. Sorry to ramble, I love hot dogs.

The real reason I wanted to go to Wondercon was the Critical Role live talk show, Talks Machina. Critical Role is a live streaming show on twitch of a

. It is very nerdy and I absolutely love it. I have watched every episode which, according to CritRoleStats.com (yeah, they even have a fan made website for statistics from the show), is over 354 hours of entertainment. It hurts typing that out, what have I done with my life? Anyway, it was a lot of fun and great to see the group of tabletop players that I have spent a considerable portion of my life watching.

*Full Disclosure: I have been DMing my own D&D game which I am turning into a novel. This has taken up all of my time and has contributed to my lack of posts on the site. Sorry

After the Critical Role panel, my wife and I attended two more panels. One was a fascinating talk on screenwriting for television by a group of showrunners. It was a very eye opening experience and made me want to be a writer for television. The best part was one of the showrunners said that running a D&D game is the best way to learn cooperative storytelling which is a very important skill to have in a writer’s room. I almost died. When I graduate next year with my English Degree I am going to give it a shot. Everyone that wants to write in Hollywood makes it, right?

The last panel was one on getting your book published by a group of traditionally and self published authors. It was actually a little sad. The only name that I recognized was R.A. Salvatore and that is because of his character Drizzt that is part of the D&D lexicon. The whole time the authors talked of the good old days of writing and how there is no money in writing anymore. Some of them were a little encouraging but mostly they talked about how the industry is in decline and how hard it is to get published these days. I left the convention a little less sure about my writing career.

I then had the experience of a lifetime. I saw a beautiful Cosplay of Onslaught, one of my favorite Marvel characters: 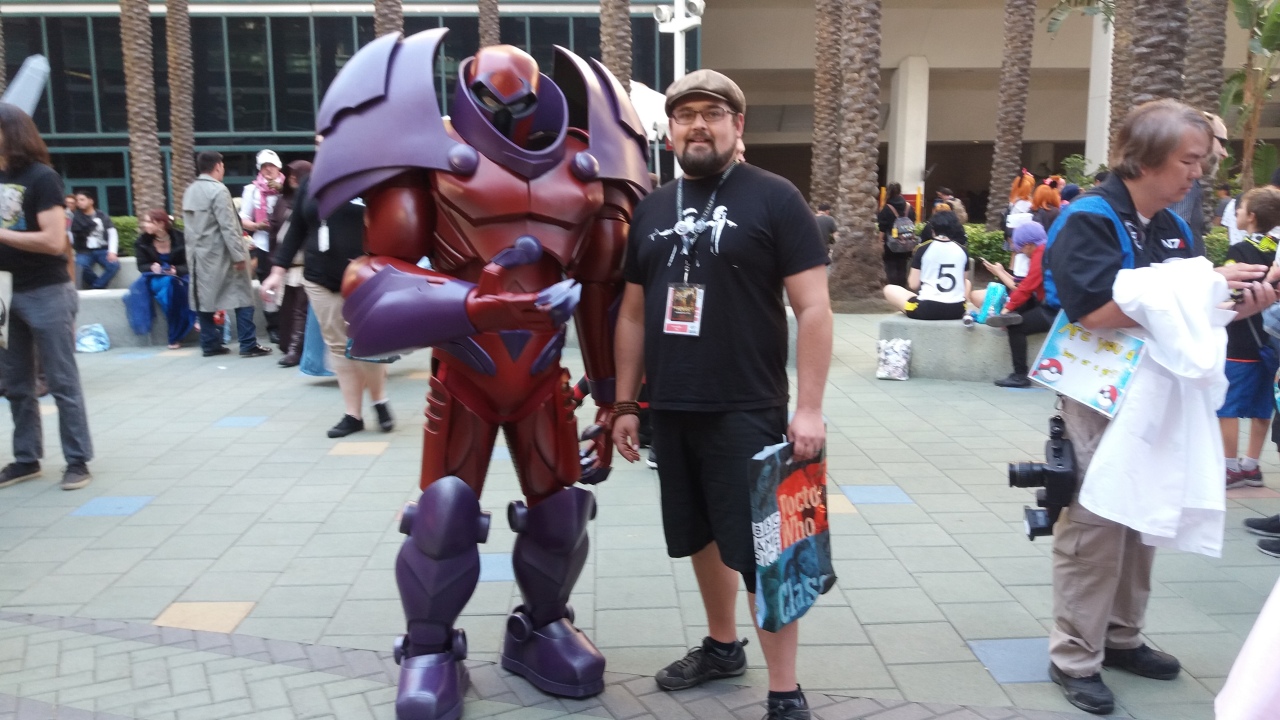 Life goal accomplished. Scratch that off of my bucket list!

We spent the rest of the time strolling through all of the pop culture merchandise. I got to see an autograph signing with the Soup Nazi from Seinfeld which was hilarious and sad at the same time. He is probably making a fortune from this convention appearance so I doubt that my pity is even warranted. Some fantastic artists had their paintings up for sale which was fun to look at. The theme seemed to be mashing up two nerdy things together to form one super nerdy thing. Princess Zelda catching a Pokemon. Goku fighting Ryu in Hogwarts for some reason. You get the picture. 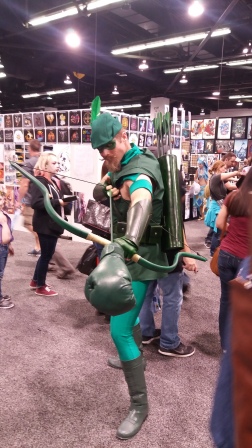 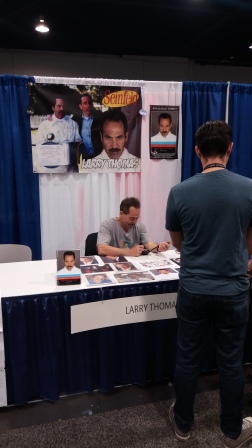 It did resemble San Diego’s ComicCon but smaller. It had all of the great booths and fantastic panels with hardly no waiting in line and plenty of breathing room to walk around the convention halls. If you have the opportunity to go, it is worth it. I will definitely be there next year and if you see me, say hello. I will be the Dork that is wandering around.

I am a dork who loves to write and travel. I write, I play poker, I love basketball, and I live and breathe Dungeons and Dragons. I want to share my experiences with the world and hopefully make you laugh along the way. If you have any questions, feel free to email my webmaster in the contact page. Thanks for reading! View all posts by Christopher Joy