For the second time someone asked me if I had any weed. I don’t know what it was about me but I guess I just had that look when I was nineteen. Don’t get me wrong, I did have weed but that was beside the point. I was on a mission.

I was wandering the streets of Chinatown in San Francisco trying to find my personal Mecca, City Lights Bookstore. I was a huge fan of the beatniks from the 1950’s and City Lights published most of them, Jack Kerouac in particular. I read Kerouac’s “On The Road” the summer before this trip and it had changed my life. I somehow convinced my girlfriend (now wife) to go on a 1,000 mile roadtrip to go to a bookstore.

The trip did not start well. We had no reservations or any plan on where to stay. To make matters worse, it was August and in the middle of vacation season. The first night we spent on the side of the highway 101 in between two large motor homes. I woke up with a kink in my neck but the view of the Pacific Ocean and the beautiful view of the mountains on the other side of the road helped me forget all about it, also the pot helped.

We continued up the coast and found our way into San Francisco. My girlfriend drove because I do not drive well in downtown areas. One-way streets confuse me and traffic can send me into a blinding rage. This sadly has not gotten any better with age. She found all day parking in Fisherman’s Wharf, which was not far from City Lights. It was a beautifully chilly morning as the sun just broke through the fog. I discovered I had forgotten to bring shoes, especially ones suited for walking around hilly San Francisco. I had my $1 sandals from Walmart but I was so excited I said to hell with it and after breakfast at Boudin Bakery we took off. We walked up many long hilly streets admiring all of the Victorian houses and hipster cafes we passed.

We took a wrong turn and ended up in Chinatown. I made the most of the situation and bought some weird gummy candy and a tiny pocket Buddha that I still have a decade later. We asked a lesbian couple with tattoos if they knew where City lights bookstore was located. They laughed and showed us we had one more block to go.

The bookstore itself was a bookstore. I do not know what I had expected but it had shelves with books on them for sale. They had many cool posters and some photos on the walls of authors that I somewhat recognized. We spent some time browsing the shelves and each bought a book. After the somewhat lackluster encounter of the bookstore, the experience of the trip was Jack Kerouac Alley at the side of the bookstore. They had commissioned all types of artists to decorate the alley to the side of City Lights as a tribute to Jack Kerouac. It was beautiful. There were murals, an ornate pathway made of broken tile, and quotes from Jack Kerouac all over it. It was gorgeous and made my blistered feet not hurt so bad. I spent an hour walking around the alley and reading all of the quotes. They twisted up and down the alley and I got lost in the wonder of it all. It made me realize the impact my favorite author had and the wonderful ways that people expressed their appreciation. I realized that Kerouac’s favorite bar Vesuvio was right next door but I was only 19. I ducked into a doorway and smoked a quick bowl in appreciation. I had found my Mecca. 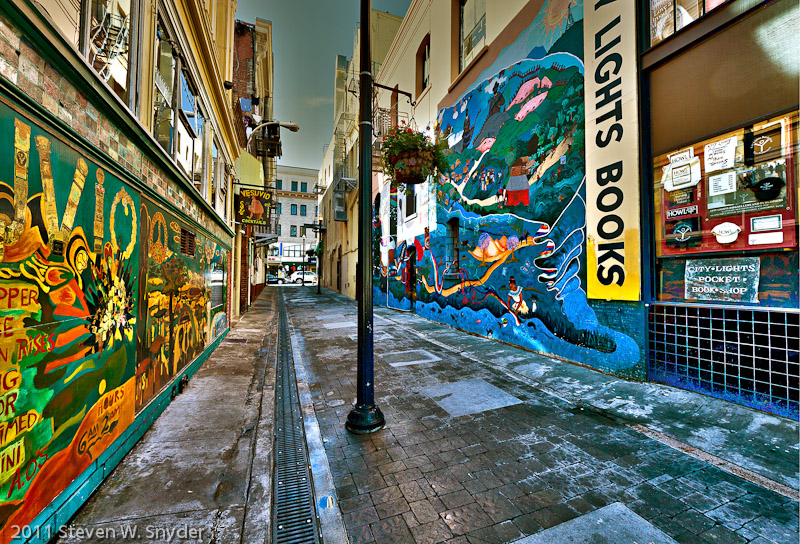